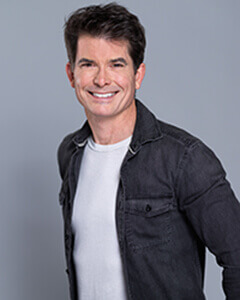 Broadway veteran Kevin Kraft grew up intermittently around the Washington D.C. area, having been born into a nomadic military family whose sparsely dispersed duty stations had him traveling through 35 states and attending 7 schools by the 10th grade. He then ran away to become the youngest clown with Ringling Bros. and Barnum & Bailey Circus, which travelled him to several additional states, this time by train. Eventually, he ran away from the circus to join a University, USC in Los Angeles. With a summer performing job on the East Coast, he drove across country 9 times between semesters, visiting more of the states he had not yet seen. After receiving a BFA in Acting, he was brought to New York with a Broadway show where he lived for 11 years, working as a theatre actor both on and Off-Broadway, regionally & internationally – acting, singing, dancing (passably) and, of course, juggling. Shakespeare lured him onto the road again where he had the opportunity to play Orlando in “As You Like It” with the Tony Award winning “The Acting Company”. The tour completed his visitations, this time by bus, to all of the 48 continental states (and a Canadian province or two.)

Kevin’s experiences during his travels have informed his narration for three New York Times Best Selling authors and “The Detective Green Mystery” series which twice won the Arthur Ellis Award. He has studied Audiobook Narration with Paul Ruben, Jayme Mattler, Shannon Parks, Johnny Heller, Ronnie Butler and Carol Monda. Kevin finally settled down to have a family in Maplewood NJ, where he has a home studio with a raised floor Isolation Booth and a Neumann TLM 103 microphone and records using Adobe Audition. This marks the longest time he has ever lived in one place.

In his spare time, Kevin runs marathons and triathlons, composes music, juggles and tries not to get demolished by his 12 year old son in driveway basketball. Oh, and he has now visited all 50 states multiple times each, having finally checked Hawaii and Alaska off his list, visiting by plane, cruise ship and Aircraft Carrier. Yes, Aircraft Carrier.

Kevin is now working on visiting all the continents. (Only 4 more to go…)

Kevin is “a joy to work with…a team player.”

I was a contract editor at Audible…I was paired up with the narrator Kevin Kraft. Kevin is an easy guy to work with and a tremendous talent. He is extremely responsive to direction – both technical and creative – and always looking to improve…He does his homework, keeping an updated pronunciation guideline at his sides while moving through novels featuring up to 70 characters and many arcane names and personalities. His work was easy to edit and of a consistently high caliber.

I’ve also been impressed by how personally he takes his work and his commitments to his clients. Hurricane Sandy wrecked our team early on, pulling Kevin away from the booth to deal with a destroyed car, a displaced family and intermittent power outages. It was a frustrating time for both of us, but his spirit never flagged. I’d constantly find him working extremely late nights and early mornings during the absolute heart of the aftermath to try to get us back on track.

He’s an incredibly hard worker…and there’s no doubt in my mind that he’d be an amazing asset.”

All 9 books in the Inspector Green series have been converted to audiobooks. My narrator was an American named Kevin Kraft…He had to take a crash course in French names, French phrases, Yiddish, and many other names from around the globe that routinely show up in a cosmopolitan city like Ottawa. From Zdeno Chara to Nadif and Marija to Romeo Dallaire; he checked them all.

Kevin researched extensively on the web to try to find either phonetic renderings or audio recordings of the words. To be thorough, he usually found at least two sources, which were often contradictory…I appreciated his thoroughness…

Each word had to be dissected so that words like Majdanek would be correct. Kevin could hear differences in sound too minute for my own ear, but he wanted to be just right. Like a writer, it had to be good enough for himself first.

I truly appreciated the care and respect with which he treated my work.

- from a writers blog entry by the author, Barbara Fradkin